Apps can now access external SD-Card. Tested with 'Total Commander' - it requests permission on first access to SD, and can then read and write to it. If you don't grant the permission(sdcard access, not the general permission for file access), i couldn't find a way in Settings to re-enable it.
'Amazon Prime Video' App don't see any external card.
'Spotify' also don't see any external card.
'DiskUsage' don't see the card, too.
'ZArchiver' sees it but it gets displayed empty (no read/no write).
If you wan't another app from google play/f-droid/amazon apps tested, just drop me a comment :) .

At first, there's a new loginscreen/lockscreen with a more modern simple design, and without that square-box around your profile picture anymore.


Only issue i've encountered so far: if you're keyboard only on a chromebook with a single user setup, you need to tap about four times on <tab>-key to get to the password field. In older releases i could instantly type my password.

And then theres the long-awaited Android Runtime update from Marshmallow to Nougat, 7.1.1 with Security Patch from 1.July 2017, to be exactly.

Means: after i first booted M61 i got a window informing me about a critical update... but it needed 30% batterycharge, even with the charger connected... so i left it alone charging. After reaching 30% it started the update/migration itself. Took some time, but worked without interaction or problems, like a update should. Couldn't take screenshot this early at login - sorry. But got a nice notification after the update:


So whats new with Android 7.1.1 on chromebooks?
At first, google play: if you're not in maximized-mode(with onscreen button) it is narrower - about 25% of screen-width (and about 90-95% screen-height). 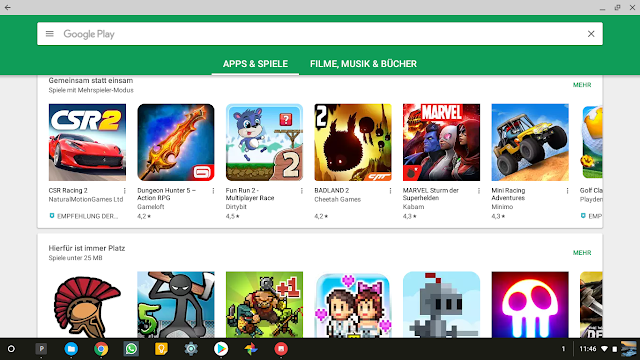 Then i started a game i played on M60 as well: Final Fantasy IV, Androidversion.
At first it looked bad to me, because on M60 it couldn't go fullscreen, and instead of using 70% width and 100% height of the screen as in M60 it was a small, freely movable, window with about 50% width and 50% height only filling a quarter of my screen. Okay - hey - let's try to maximize (immersive key, some call it F4 ;) ) it. Damn, the same as in M60 it force-closes. But after restarting Final Fantasy IV it was still maximized. On M60 you had to press the immersive-key (F4) everytime. And another Force-Close -.- Just one more try, and to my surprise, it's now working fullscreen without any issues. Nice.

But theres still two things i liked to be fixed. As a good example i like to use Amazon Prime Video (Android App, because it allows you to use it offline): It is now more phone-like if not maximized with a ratio of about 1:2, but of course won't autorotate, so you see only the middle part of the video. Here i hope it will get the quarter-screen-sized and freely movable window as Final Fantasy IV too and continues to play if it looses focus - would be really nice to watch streams while browsing like picture-in-picture mode.

Okay, the R11 got a tablet mode too if flipped, so what about Android Apps there?

It just shows one app maximized at a time as usual.

As in M59, but missing in M60, they brought the ChromeOS-Settings back to material design. Nice, sometimes a bit fiddly with the touchscreen and big fingers, but with a bad thing for bug-reporters: you can't copy most informations (buildtime, version, arc-version) anymore at once -.-

There's still another bug that bothers me: Sony's DualShock 4 can't be used with bluetooth on the R11 anymore. And now with true fullscreen for android apps it would be a pleasure to hook my R11 via HDMI to my TV and sit on the opposite wall of the room and play via bluetooth gamepad. But for now via usb it works great - so i need either a long usbcable or a long hdmi-cable -.-

For the non US-Layouts like German, you still can't snap or dock windows to the left or right with keyboard shortcuts - But theres a bugreport going on about this since january now...

And with the new material settings, like in M59, there's no more night-mode but instead you can choose if wifi stays on or not in standby.

Thank you for reading and as everytime i'm glad to hear feedback, your experience and more about this article, my blog itself or some suggestions via mail or in the comments below. David-Lee
Posted by David-Lee at 12:16 Keine Kommentare:

"For some reason they sent the drive encrypted, I went into Windows settings and Unencrypted it. Crystalmark scores went from ~60-80MB which I was pretty disappointed about, to 160MB. I have screens at home showing the change don't have them here to post. If you don't need it encrypted which I'm sure most won't, disable it immediately. Still trying to figure out the low sd speeds a 45MB per sec card is scoring between 12-20MB."

turbo-enabled(locked) with charger plugged in

"For people still having problems where the smart gesture software stops working after resume, this seemed to work for me:

Create a .bat file with the following commands:


Code:
The problem seems to be with these and not AsusTPLauncher. After the .bat runs, AsusTPLauncher will automatically restart those applications.

Put the .bat somewhere where you won't mind leaving it permanently. I put mine in C:\Utility\Scripts\

Now you want to schedule this .bat to run every time the laptop resumes. Press Win + R and enter 'Taskschd.msc' to run the Task Scheduler. Click create basic task, and give it a name. Description is optional. Set trigger to 'When a specific event is logged'. Set log to 'System', source to 'Kernel-Power', and event ID to '507'. On my x205ta I found this event to happen every time it resumed from sleep. I assume it is the same for all x205ta laptops. If you find these instructions do not seem to work for you, if may be that this event does not happen on your x205ta. Try looking up how to use the Event Viewer to find an event that always happens upon resume for you.

Set action to 'start a program'. Set program/script to the .bat file you made. Click next. Check 'open the properties dialog for this task when I click finish'. Click finish.

Click on the 'conditions' tab. Uncheck 'start the task only if the computer is on AC power'.

It wouldn't hurt to go to the 'settings' tab and change 'stop the task if it runs longer than' to '1 hour', and 'if the task is already running, then the following rule applies' to 'stop the existing instance' just in case the .bat fails to close on it's own for whatever reason.

If you want to test it to make sure the .bat is actually running each time you resume, add a temporary third command to the .bat:

Code:
Put it to sleep, wake it up, and then check for the TEST.txt file in the root directory of C:\. Subsequent resumes will add a line of text to the file each time.

I imagine this will work for other pc models having this issue with the ASUS SmartGesture software, though you might have to use a different event for the task scheduler.

Hope this helps."
Posted by David-Lee at 20:05 Keine Kommentare:

To Fix the non working Crosh Extension and even add the possibility to open multiple crosh windows and cycle them with alt+tab do this:

From the browser, press crtrl-alt-t. This will bring up crosh in a tab. Then in the upper right browser menu, select 'More Tools > Add to Shelf'. Then right click on the newly added icon in the app shelf, and select 'Open as Window'.

Btw. did you know you can also use the required Secure Shell Extension to open a crosh?
Add a connection for username "crosh" and hostname ">crosh". (Actually, the username can be anything).
credits to Dale Brayden and the ChromeOS Mailinglist

Posted by David-Lee at 19:48 Keine Kommentare: